Showa Denko K.K. (SDK) (TOKYO: 4004) (President and CEO: Hidehito Takahashi) has confirmed that its process to produce “low-carbon ammonia” from used plastics at its Kawasaki Plant (Kawasaki City, Kanagawa Prefecture) emits more than 80% less GHGs (including CO2) than other conventional processes to produce ammonia from fossil fuels. SDK has confirmed this GHG reduction effect with a method of calculation whose conformity with ISO has been certified by Japan Life Cycle Assessment Facilitation Centre (LCAF), which is an independent observer. Thus, SDK has confirmed its low-carbon ammonia’s excellent environmental performance with a method certified by a third party as the only case in Japan.

Low-carbon ammonia contributes to “recycling of plastics” and “decarbonization”

Following a social trend that aims to realize carbon-free society, the demand for ammonia is expected to increase because ammonia does not emit CO2 when it is burned and is expected to function as a carrier of CO2-free hydrogen energy. However, it has remained an outstanding problem that conventional process to produce ammonia which uses fossil fuels as raw materials emits a large amount of CO2.

Amid such a social trend, SDK’s low-carbon ammonia has achieved CO2 emission reduction of more than 80% throughout its production process by utilizing plastics as a raw material, while not using fossil fuels nor energy produced from them. This time, SDK confirmed this excellent environmental performance of its low-carbon ammonia by utilizing a calculation method whose conformity with ISO has been certified by LCAF. 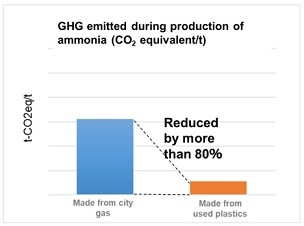 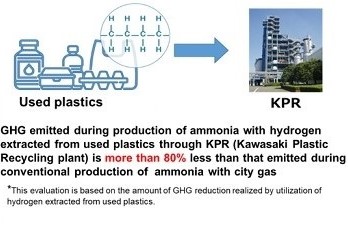 SDK is the only company in the world that has been stably operating a plant for gasification and chemical recycling of used plastics for a long term. CO2 is reused to produce dry ice and carbonated drinks.

In 1930, SDK started to produce ammonia as a raw material for fertilizer in Japan. Since 2003, SDK’s Kawasaki Plant has been operating “plastic chemical recycling business,” a business to recycle used plastics as raw materials for chemicals including ammonia. SDK calls this business “Kawasaki Plastic Recycling (KPR).” Moreover, in July 2015, SDK’s proprietary process to produce this liquefied ammonia, which uses low-carbon hydrogen produced through KPR as a part of raw materials, was accredited by Japan Environment Association, which sponsors the “Eco Mark Program” to praise environment friendly products/processes, to be eligible for Eco Mark, an official Japanese program in conformity with Type-1 environmental labelling principles hosed by Global Eco-labelling Network, as the first case of production process in the world. Therefore, SDK has named its ammonia “ECOANNTM”. The low-carbon ammonia, which was confirmed this time to show excellent environmental performance to reduce CO2 emission by more than 80%, is the ammonia produced from hydrogen extracted from plastics recycled through KPR.

KPR plant utilizes used plastics discharged from households and corporations as raw materials, gasify those plastics into the level of molecules, and extracts hydrogen and CO2 (chemical recycling through gasification). This process does not use any fossil fuel. Therefore, its heat exchange rate is 100%. While hydrogen extracted in this process is used mainly as a material to produce low-carbon ammonia “ECOANNTM”, CO2 is not emitted into the air but used as material to produce dry ice, carbonated drinks, carbon dioxide gas for medial use, and other useful products. Thus, KPR achieves resource recycling. KPR is the only plastic gasification and chemical recycling plant in the world that has been operated stably for almost 20 years.

KPR has recycled one million tons of used plastics in total, and received many awards.

KPR can recycle about 200 tons of used plastics per day, or about 60 thousand tons per year. KPR achieved recycling of one million tons of used plastics in January 2022. Since 2015, SDK’s KPR project has been accredited by the Ministry of the Environment as one of “Demonstration Projects to Promote Local Consumption of Locally Produced Low-carbon Hydrogen Gas Made from Used Plastics.” Moreover, In January 2016, KPR was awarded a “Silver Prize in the Eco-Mark Awards 2015” from Japan Environment Association, and in February 2020, KPR received “Award from Chairman of the Japan Business Federation (Keidanren)” as a part of Fujisankei Communications Group’s 29th Grand Prize for the Global Environment Award, and in November 2020, KPR received “The Grand Prize, Award from the Minister of Economy, Trade and Industry” as a part of Green Purchasing Network’s 21st Green Purchasing Award. Thus SDK’s KPR is acclaimed highly, and expected by society to contribute to environmental protection. 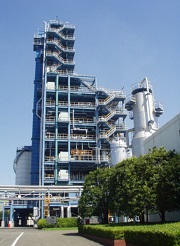