In general, terminal blocks require sealing around the terminals (where the electric current flows) to prevent water from entering the unit. In particular, the importance of sealing terminal blocks increases because of the long outer circumference of the terminals through which high current flows. Concomitantly, because of the metal/resin interface, advanced sealing technology is required. Currently, thermosetting adhesives are mainly used for leak-sealing of terminal blocks, but require careful coating processes and long heating times.
We propose using WelQuick, which wraps a film around the terminal to seal and prevent leakage.
By using our product for sealing between the metal terminals and resin molding material, one can simplify sealing of the terminal, resulting in substantial time savings and cost reductions.

This video (1 min) shows how to use WelQuick as a leak seal for terminal blocks and its benefits. 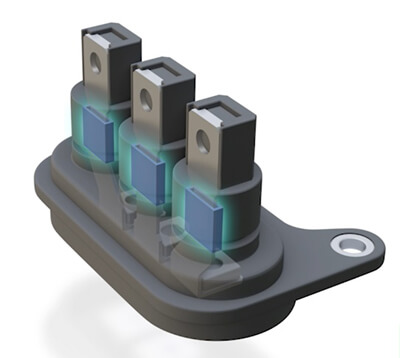 Among terminals that undergo flow of high electrical currents, PCU (Power Control Unit) terminals for electric vehicles are mainly sealed by the potting and liquid primer methods, both of which use thermosetting adhesives. Both methods require complicated handling of liquid adhesives, heating at a high temperature, and a long curing time. WelQuick, a thermoplastic film adhesive, is easy to handle and decreases the heating time for curing. All that is required is to wrap the film around the metal terminal, put the terminal in the mold, and insert-mold the sealing resin. The film bonds the metal terminal to the sealing resin and provides high sealing performance.

Features of Leak Seal with WelQuick

Easy handling by simply wrapping the film around the terminal

Liquid adhesives require management of liquids and careful coating processes, whereas WelQuick (a film adhesive) is easy to handle and can be easily wrapped around terminals.
For leakage test results of WelQuick, please refer to the technical leaflet.

Conventional liquid adhesives require 1 h or more for temporary curing and heat curing. However, WelQuick can be sealed simply by wrapping the film around the terminal and insert-molding the sealant, eliminating the need for a long curing process. 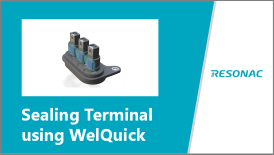 Please don't hesitate to contact us if you have any questions.